Roger Druine was a French flying instructor in the 1950s with several aircraft designs already to his credit, including an attractive little single-seater known as the D.31 Turbulent. He realised that there would also be a ready market for a simple-to-construct two seater, which could act as a club aircraft and an economical tourer; the result was the Druine D.5 Turbi. 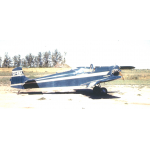 The Druine D.5 Turbi is a French ultralight Homebuilt aircraft designed by Roger Druine.Plans show open cockpit with dual controls that can be flown solo from either the front or back seat.  Original design was a dual windshield open cockpit.&..